Comedian Trevor Noah is a very funny guy. But he can be very serious too. His memoir Born a Crime: Stories of a South African Childhood helped me understand apartheid, which he calls “apart-hate” for good reasons.

According to Noah, “Apartheid was perfect racism.”

He describes the horrors of this system:

In America you had the forced removal of the native onto reservations coupled with slavery followed by segregation. Imagine all three of those things happening to the same group of people at the same time. That was apartheid.

In other words, American racist policies contributed to the suffering and oppression of black South Africans in the twentieth century. This is a legacy of shame for all involved. 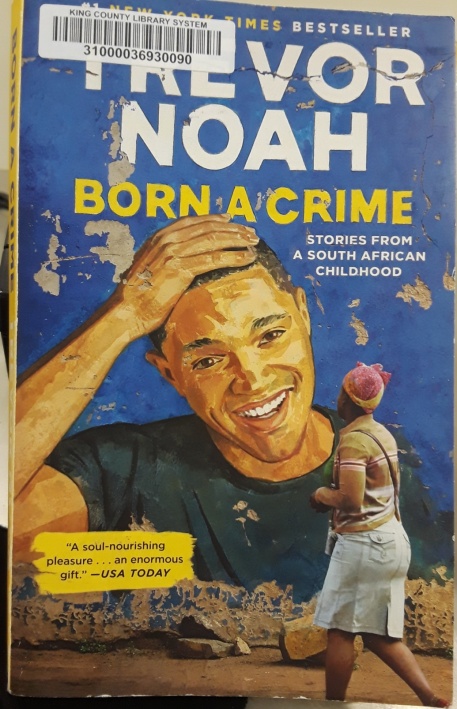 Noah was born in 1984, ironically in an Orwellian police state that was South Africa. His status was complicated because he was mixed race. This wasn’t supposed to happen with anti-miscegenation laws in place. As the offspring of an African mother and European father, Noah came into the world as evidence that a crime had been committed. He writes, “…[O]ne of the worst crimes you could commit was having sexual relations with a person of another race.”

While his stories are hard-hitting, they’re also heart-warming. He deploys his humor strategically. Despite his struggles and hardships, I felt uplifted in recognizing that his story is actually about how the love of his fearless mother contributed to his survival and success.

In a racist U.S., mixed race people also face challenges. Not so much in Hawai’i although other racial issues persist.

Anti-miscegenation laws were designed to prevent different races, primarily Blacks and Whites in the U.S., from fraternizing socially and producing mixed-race children. Black people were not supposed to be equal to Whites; they weren’t supposed to be as human as Whites, so these laws were another attempt to dehumanize them, to mark them as “other.” In 1967, the U.S. Supreme Court ruled these laws were unconstitutional in the case of Loving v. Virginia.

Hawai’i was one of nine states that never enacted such laws. In any case, they could not have been enforced, especially between military personnel and the local population when hordes of white men arrived in the islands in the late 1930s in advance of a likely war with Japan.

James Jones’s novel From Here to Eternity features these relationships. While his depiction of local characters are flat and caricatures more than realistic, I believe he accurately describes the predictable racial tensions.

Another view of these racial tensions is recorded in Local Story: The Massie-Kahahawai Case and the Culture of History. In this book, John P. Rosa, professor of history at the University of Hawai’i, reveals the tragic consequences of racial conflict and the resulting racial injustice when military personnel accused several local boys of murder in the early 1930s, subsequently killing one of the boys.

According to Rosa, these events galvanized the different ethnic groups into what has become Hawai’i’s local culture. Hordes of white servicemen, a transient population, arrived from the mainland where segregation laws and racist attitudes toward nonwhites were in place. How the military conducted itself in this case was a precursor to events during World War II when martial law was imposed in Hawai’i. I believe a case can be made that such military control was racially motivated.

An undercurrent of tension in varying degrees between locals and White people continues today. Male White privilege that justified colonization of the islands and eventual removal of its queen in order control the government to promote business interests, as well as the above incidents, provide the context for such tensions.