Photo Gallery/ References to My Memoir

If you have read my book The Lava Never Sleeps: A Honolulu Memoir, you may find these photos provide visual references to the narrative.

While my father’s Chinatown store closed in the 1970s, the building remains and is now occupied by the very popular restaurant The Pig & the Lady and The Pacific Gateway Center. Hint: Reservations are highly recommended. 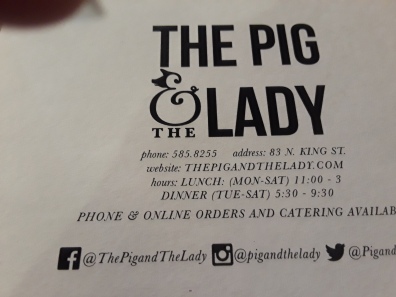 We had a most delicious lunch there! Even though the interior and entry have been completely remodeled, the original brick walls remain. I couldn’t help feeling nostalgia for all the times I had spent between those walls. See p. 29 for a description of Yuen Chong Co.

My dear friend Liz Aulsebrook joined me and Carol for lunch there. I’ve known Liz since the 1980s and she was one of my beta readers when I finished the very first draft of the memoir.

She recently retired, so we celebrated my book and her retirement!! 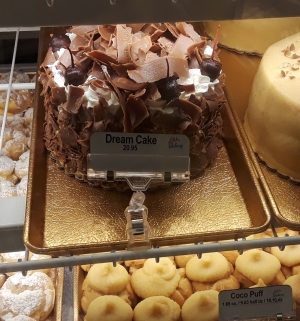 Dream cake! I described this lovely cake on p. 22. This is the cake display at Liliha Bakery at Macy’s in the Ala Moana Center. I really wanted a piece, but they only sell whole cakes.

The original bakery is located near my childhood neighborhood. This new location at the shopping center recently opened, a happy surprise!

My alma mater St. Andrew’s Priory in Honolulu continues its educational mission as established by Queen Emma. I am pleased that the school continues under strong leadership that ensures a curriculum that includes Hawaiian culture and prepares its girls for all career options. I refer to Priory on pages 66 and 161.

Class of 1967! Here is my graduation photo with my parents.

I describe the ancient voyaging canoes that brought the first people to Hawai’i; see p. 164. Reproduced in recent times to travel throughout the Pacific, this is a model on display at the Bishop Museum. The museum also

displays an ancient paddle which indicate the ancestors of the Polynesians were from SE Asia; see p. 156.

Another dear friend, Lilette Subedi reviewed my manuscript to ensure my cultural references were appropriate. She also provided the ancient canoe chant and translation on p. 167. I have recited this chant at most of my readings to invoke the culture, 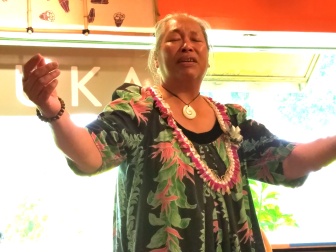 reinforce the journey implied in my story, and emphasize the value of community.

At my Honolulu reading at Na Mea Hawai’i/ Native Books, she chanted a beautiful oli to welcome everyone and added a naughty Chinese ditty that I had never heard.

Finally, my travel buddy on my September trip to Maui and Honolulu was Carol Cummins, a long-time 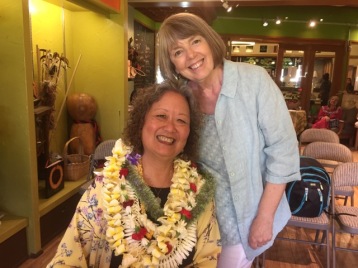 friend who was one of the original members of the Seattle women’s group I joined in 1988 (p. 110). This was her first trip to the islands, and she met my friends, classmates, and family, who welcomed her with genuine aloha spirit. I was happy to share an insider’s view of my beloved islands with her.

What a memorable trip for both of us!

“What school you went?”

This question always comes up when Hawai’i’s local people get together. Always. It’s short-hand or code to understanding the individual. It’s more important than their neighborhood since someone going to a private school can live anywhere.

My sisters and I went to St. Andrew’s Priory in downtown Honolulu. My brothers went to St. Louis High School and ‘Iolani. My father wanted us to go to college-prep schools. And I think he didn’t want us picking up Pidgin, spoken commonly among public school students, and perhaps he feared other bad influences. We all would have gone to McKinley, which both my parents attended, if my father could not have afforded to send us to private schools.

Because we live in an island community, local people know the different schools and some of the more extreme reputations of some schools. If they’re into football, they can recall the rivalries, the big football games of their generation, and memorable athletes. If someone answers: “Wai-‘anae,” the inquirer might step back, but not before a respectful “Ooooh!” escapes. You had to be tough to grow up in Wai-‘anae and survive. No one messes with kids from there, not if you value your life. They may not have the material comfort of those in other parts of the island, but they live close to the land and the ocean.

Many native Hawaiians live in this coastal community in the shadow of Mt. Ka‘ala and the Wai-‘anae Mountain Range. And in fact, Wai-‘anae Valley was once known as the area’s poi bowl. It produced enough taro, or kalo, to feed those living along this leeward coast. Today, Ka‘ala Farm and Cultural Learning Center has restored ancient terraces to once again grow taro and to reinforce Hawaiian cultural values.

Knowing someone’s school might connect two people to a mutual acquaintance. It roughly identifies socioeconomic background, whether someone is “country” or “townie.” Public high schools in town are McKinley, Ka-imu-kī, Roosevelt, Farrington, University, and Ka-lani. Of these, Farrington had a bad rep; in my day, I heard about lots of fighting among both guys and girls. Its student population was very diverse–kids living in Ka-lihi, a poor to middle-class neighborhood, where new immigrants could find cheap housing. It had a good football team powered by huge Samoan guys.

In contrast, Ka-lani High School was located in the Wai-‘alae-Kāhala area, inland from Diamond Head, where many middle- to upper-class families lived, an enclave for white people, but not exclusively.

Private high schools attracted students from both middle-class and upper-class families. Many Catholic schools, Mid-Pacific Institute, Puna-hou, Ka-mehameha, Priory, and ‘Iolani are some of them.

Of these, the most expensive, most prestigious (to some), and perhaps most academically rigorous is Puna-hou, which was founded by the missionaries for their own children. This elite status continues today although children from various ethnic groups now are admitted.  A boy named Barak Obama graduated from this school.

I think the Priory had a good reputation. It was founded in 1867 as a private boarding school for Hawaiian girls under the auspices of the Anglican Church and founded by Queen Emma, wife of King Ka-mehameha IV. I remember wandering down a long hall where the photos of each graduating class were hung. It was like walking through history; I noticed the changes in the uniforms, hairstyles, and ethnic backgrounds of the girls. 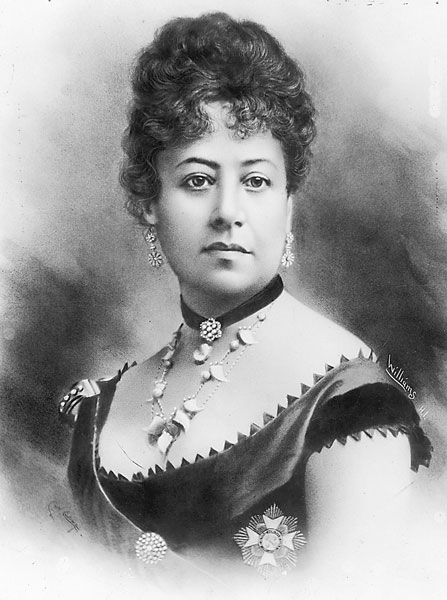 Priory’s Centennial Class graduated in 1967, which was my class. Our 5oth class reunion is scheduled for Spring 2017. I was stunned to realize that nearly fifty years have flown by since we graduated! How is this possible?? Some of us have reconnected through the reunion Facebook site. I don’t have my yearbook, but some of my classmates still do, and one classmate posted digital pages. Seeing these pages and communicating via Facebook have stirred my memories of these years.

At first I wasn’t sure I would attend this reunion; I haven’t been in touch with anyone nor have I visited the school since graduation. All of us have changed. But these were important developmental years of learning and growing together. As a writer, I know how memories can be both enriching and unreliable. And yet, sometimes this is all we have to hold on to something in the past. By connecting again to my classmates, I can piece together and revisit these almost forgotten days of long-ago. Some of my classmates and I go back to elementary school. I’m looking forward to seeing my classmates again and sharing our stories!